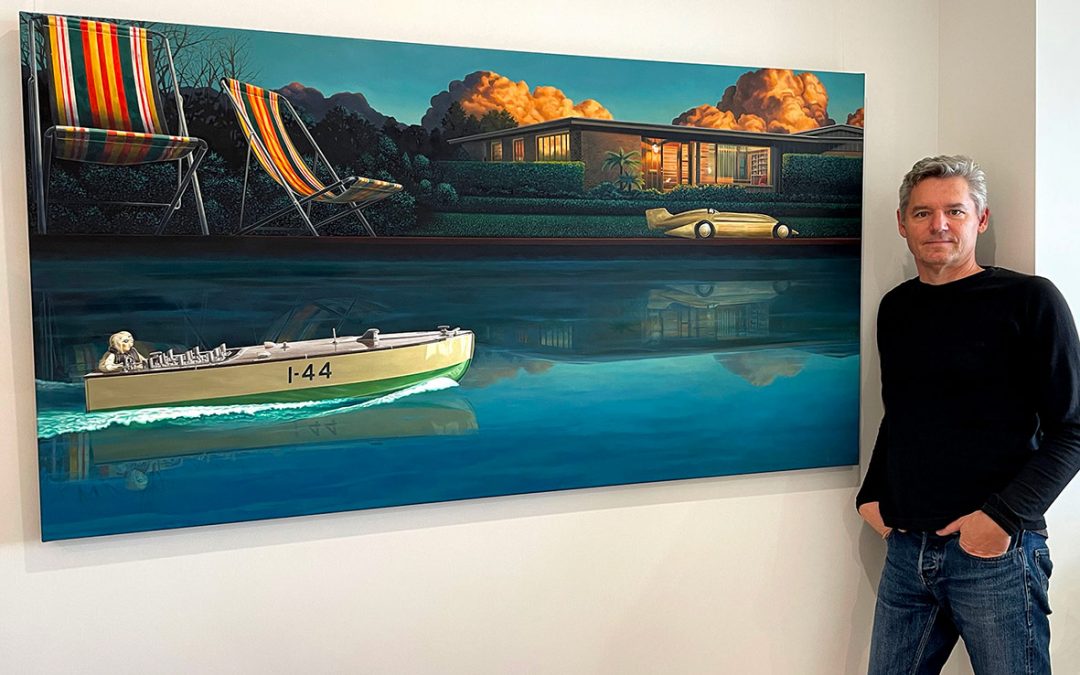 There is something magical about clockwork toys. The engineering is superb. Here are two of my tinplate windup toys. Both are about 17 inches long and are built for speed.

I have featured Lionels Tinplate No 1-44 Toy boat. The 1 prefix denotes that this model is a reproduction by lionel from the original 1930s mold and reissued in 1980. Constructed of stamped tinplate metal, the 1-44 sports a glossy baked enamel finish & nickel plated trim, opening hatches and two figurines. Under the hatches, a clockwork motor powers the prop for up to four minutes of wild water racing! The rudder is adjustable to allow the boat to travel in circles, or it can be locked in place so that the craft can run straight out for about 100′ before automatically turning itself around and heading back toward the operator!

I’d been looking for this model for several years and finally found this boxed example in the States. I also have its twin No 43, which will feature in a later painting.

I also own and feature the fantastic clockwork tinplate race car “Golden Arrow”. This is a beautiful limited-edition race car by Schylling of Germany. This model of the famous Golden Arrow celebrates the Land Speed Record of 231.45MPH set in 1929 by Major Henry Seagrave at Daytona Beach. Many consider the Golden Arrow the best-looking Land Speed Record car ever built.

Lionel Corporation was an American toy manufacturer and holding company of retailers that had been in business for over 120 years. Founded as an electrical novelties company, Lionel specialised in various products throughout its existence. Toy trains and model railroads were its main claim to fame. Lionel trains have been in production since 1900, and their trains drew admiration from model railroaders worldwide. The solidity of their construction and the authenticity of their detail. During its peak years in the 1950s, the company sold $25 million worth of trains annually.

For over forty years, Schylling, Inc. has specialised in timeless toys. Among these lines are the iconic tin toys that have been an important part of the company’s history. In addition, Schylling produces Limited edition high quality reproduction Tin plate toys.

This site uses Akismet to reduce spam. Learn how your comment data is processed.

9600 Limited is a New Zealand owned company trading as jonesthepainter. All purchases are billed in New Zealand Dollars and all prices include GST when the country selector is set to New Zealand. No GST is charged for orders outside New Zealand.