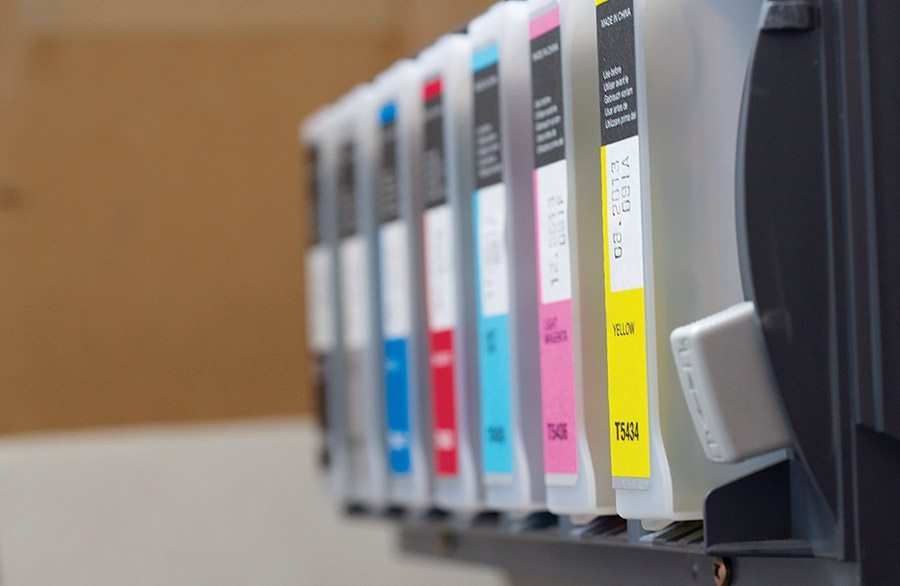 All of my editions are produced as giclée editions. The word giclée (pronounced zhee-klay), is a relatively new name that was created in 1991 by a printmaker named Jack Duganne. It is derived from the French word gicleur, which means “nozzle”—the verb “gicler” means to squirt, spurt or spray—and was established to describe a new form of fine art printing where artwork was digitally reproduced using Scitex IRIS printers; a new inkjet technology that could create amazingly detailed and faithful reproductions.

Scitex had originally developed their products for the commercial printing industry as a means to proof artwork before making plates and going to press. Jack Duganne recognised the exceptionally fine print quality of this technology and began exploring its potential using watercolour paper.Although the initial prints looked stunning, the materials used were not particularly stable, so there has been a considerable effort over the years to address those issues, particularly in the area of inks and substrates.Today, giclée editions are considered the preferred choice for fine art reproduction by publishers, galleries and artists around the world. They are renown as having superior beauty, quality and archival longevity. In fact, many leading museums, including the Louvre in Paris, display giclée reproductions of originals that are stored in the museum cellars and would otherwise not be visible to the public. Some even purchase giclée editions for permanent display in their collection.

Giclée editions are themselves considered a one-of-a-kind work of art since each print has been created individually as opposed to being mass produced on large commercial presses as in the case of lithographs. Interestingly, published giclée editions often increase the value of the original painting.

As with most modern giclée printers, my equipment uses a highly sophisticated print head that disperses fade-resistant archival inks as a micro-fine mist of minute droplets; creating a seamless, continuous tone. It consists of multiple cartridges for variations of each colour based on the CcMmYK colour model (light magenta and light cyan inks in addition to regular magenta and cyan); this increases the apparent resolution and colour gamut and allows smoother gradient transitions.

Before giclées, limited editions were commonly produced as lithographs which are printed using the same process as magazines and posters. This process uses inks with dyes in them that are more likely to fade and they are printed on a rag paper that tends to absorb the ink, causing the printed dot to expand into adjacent dots (called “dot gain”), resulting in muddy colours. Printers may try to correct this by using coated pulp papers which minimizes the dot gain, but over time the acid in the paper tends to yellow and attack the ink. 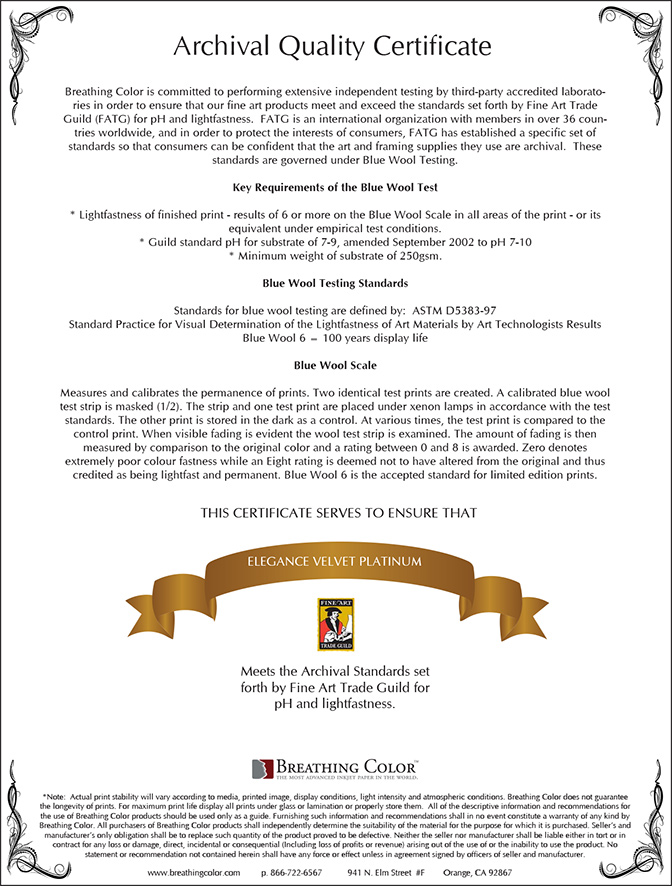 The manufacturer guarantees that no other 100% cotton rag fine art paper on the market today can compete with the colour gamut and Dmax that this fine art paper delivers. It is a water-resistant 310gsm paper made from 100% cotton fibre that is acid and lignin free and is stronger and more dimensionally stable than other velvet inkjet papers currently available today.

This combination of ink and paper stability ensures a fade and colour shift resistance exceeding 100 years under average indoor light conditions, making them the reproduction of choice for museums, galleries and artists.